What if Where I Live becomes Unlivable? 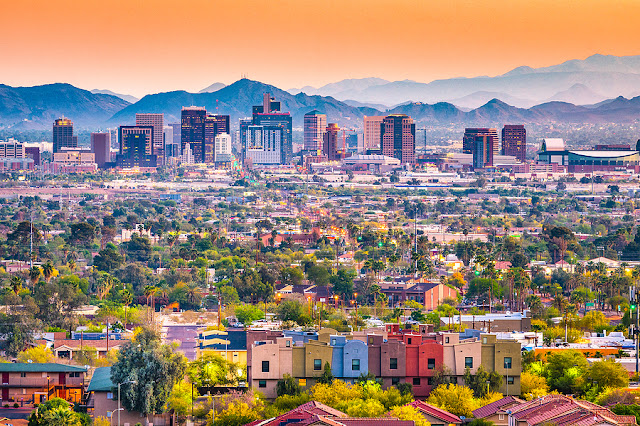 For over thirty-six years, I have called the desert my home. Clearly, my family’s decision to live in a land with little rain and more than enough heat was not unpopular. The Phoenix area has claimed us since 1985. During that time, the metropolitan population has grown from 1.7 million to almost 5 million fellow Phoenicians. It is the fifth-largest city in the country.

In 1985 there was one (partially completed) freeway. Now, there are seven and more are needed because of our love of cars. Yes, there is a decent bus system and even light rail. But, prying us out of our vehicles will be a tough sell, especially when you consider the full metro is almost 15,000 square miles in size.

Using a more conservative measurement, the metro area is only 10,000 square miles or 100 miles in each direction. To put that in perspective, the island we spent a fabulous vacation on just three weeks ago, Kauai, is only 552 square miles. Twenty-eight Kauai’s would fit inside the full Phoenix metro with room to spare!

We have come to tolerate the 100+ degree days from May to October. Neither Betty nor I would exchange that high heat for a place with lowers temperatures but higher humidity. “It’s a dry heat” is really real. 15% humidity makes 100 bearable, sort of, for a while.

But, wait. Climate change and its effects on the desert are beginning to show its power. Projections of more days over 100, even 115+ readings, will become not just an occasional occurrence. Already, we expect at least 120 days over 100 degrees and a dozen over 115. Add an increase due to global warming, and a logical conclusion is half of each year will warm past the century mark.

Just last month, a potentially fatal development was reported. The Colorado River is not that many years away from running out of enough water to serve the 40 million folks who depend on that flow to live, grow crops, even generate electricity. The 336 miles long Central Arizona Project uses water from the Colorado River to serve Phoenix and Tucson.

Both Lake Powell and Lake Mead are dropping to the point where there won’t be enough water to run the massive electric generators that supply Las Vegas and much of Southern California by sometime in the next decade. Phoenix gets one-third of its electricity generation from nuclear power, but oil remains vital. Yes, solar power is growing, but will there be enough time?

So, there’s the picture. The place I and millions of others call home is facing an uncertain future. With heat building and water dwindling, America’s southwest desert is at risk just as much as coastal areas that will flood or the places devastated by increased hurricane and tornado activity. As weather patterns change, what we “expect” a place to be like will not be what it is.

How do I plan for that? Where would we go? I am not so worried for Betty and me. When the conditions here are beyond acceptable, we will be pushing up daisies (or cactus). I am more concerned for my daughters, my son-in-law, and my grandkids. Regardless of where they go, how disruptive and unpleasant will their next choice be?

Just for the sake of argument, let’s say humans are not responsible for global warming. I don’t believe that for a second, but humor me. Even if what is happening is purely a normal cycle of change, after the last time something this dramatic occurred, dinosaurs could only be found in movies and their bones in a museum.

Why do we continue to act as if someone, or that all-power “they,” will find a solution that doesn’t disrupt everything we have come to know and expect? What happens when the water stops flowing, the electric grids can’t cool a home in Phoenix, and Palm Beech, Florida, becomes an underseas diving attraction? What happens when Portland regularly breaks 90 degrees, all the permafrost in Alaska melts, and St. Louis begins to experience the heat and humidity of the south?

I don’t have an answer. But, I truly believe we are running out of time. And, I haven’t a clue how I, or you, or our grandkids will solve this problem.

My only hope is enough humans are made uncomfortable and scared enough to give this situation the attention and urgent action it demands. We seem to only react when everything is on the line.

At least in the desert, I can see that line moving ever closer.