What Does All This Mean? 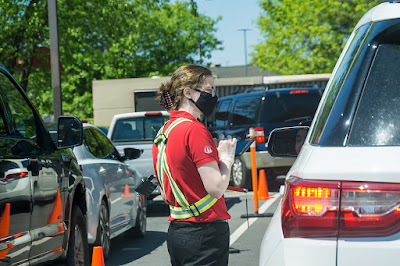 I had experiences twice in the past few weeks that were firsts for me. I visited a chain fast food restaurant to get something quick for Betty. She had just finished a medical procedure that required fasting; she was very hungry.

Inside, I was greeted with a sign that listed several standard ingredients and supplies that were unavailable.

A few days earlier I entered another well-known chain to see two middle-aged men without the usual clothing of the company, along with two harried teenagers. trying to accommodate both the drive-through customers and those of us at the counter all while running the various cooking appliances and putting together the orders.

It is not my usual practice to be at fast food places very often, so maybe what I saw is the new normal. I am well aware of supply chain problems and the  phenomenon of low-paid workers walking away from burger-flipping positions. But, until last week I hadn’t seen the direct impact on what has been a regular part of American Life.

These instances raised a question for me: will Covid and all its effects on both health and attitudes begin to force a fundamental readjustment in part of our social structure? Will a culture built on instant gratification and workers always available to take care of our needs have to rethink this foundational mindset?

The supply-chain issue should not come as a surprise. Yes, Covid has made it difficult for finished products and raw materials to move from place to place. Shutdowns and illness have thrown a monkey wrench into a system built around the idea of “just in time.” Keeping inventory limited, knowing that restocking something was just a phone call or computer click away, has shown its vulnerability.

It made quite clear what happens when an economy that is built around having supplies scattered all over the world, suffers a disruption. For those of us old enough to remember the oil embargo of 1973, we watched as things began to shut down, gas stations had lines stretching for miles, and our economic system and national security were being seriously disrupted.

Now, with that lesson way back in our past, we are more dependent than ever on other countries to keep things humming. China is a major problem for us in the world, yet that country owns over 1 trillion dollars of American debt, and simultaneously, is the most important supplier of products that we have come to depend on.

The second part of the “fast food” lesson I learned is the direct impact of both Covid and an awareness that the “invisible” workers are essential to our business model. I quickly add that the term, “invisible workers” is not a judgment on the quality or type of work being done, rather it refers to all the people who work out of sight and are not part of our daily thoughts.

Think of many hospital workers and staff, truck drivers, clerks in retail, warehouses, and grocery stores, and the two teens I saw at the burger place. Think about the people who restock the shelves at the grocery store or the neighborhood Walgreens. When we stop to think about it, the list includes most of the people who keep our world working.

What is happening is that these employees are realizing they have some real power to change the equation that has left them behind any economic recovery. Millions of workers have decided that the wages offered by the companies they work for are unlivable and demeaning. With the demand for people to restaff, these folks are refusing to go back to the old model of minimum wage for long hours. They have the newfound economic clout to hold out for better wages and benefits.

Consequently, the impact of our dependence on a worldwide supply chain to respond instantly to our needs along with the realization by many on the bottom rungs of the economic ladder that they have more bargaining power than ever before might cause a basic adjustment in how we live.

Being able to order anything we want at any time, expecting shelves to always have 50 different kinds of cereals, and becoming frustrated if our time in the drive-through window is longer than 30 seconds, we may find that Covid has done more than kill 775,000 Americans and over 5 million human beings worldwide.

Maybe it exposed some inherent weaknesses in a system built around getting whatever we want, whenever we want it, at a price that harms those who provide that service. Maybe we will understand the costs of a society built around convenience and choice at any cost. Maybe Covid and its aftermath will teach us the value of patience and placing value on everyone who works at whatever job they hold, be it a doctor or a shelf stocker.

The next few years will reveal whether we have learned some valuable lessons this time.