The War in Ukraine Has Sharpened my Focus 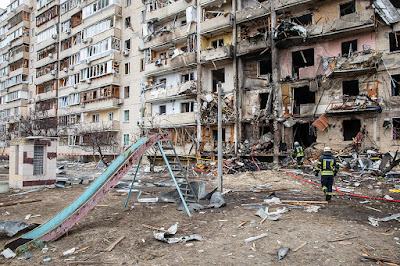 The insanity of the ongoing Russian invasion of Ukraine has brought some thoughts of mine into focus. I look at the actions of President Zelenskyy and marvel at his strength, determination, and leadership at a time of such peril.  I wonder what has caused the seriously outnumbered citizens of Ukraine to fight with such ferocity against seemingly unbeatable odds.

As a democracy that has existed for only thirty years, I marvel at the depth of commitment to the idea of a nation that is so ingrained in the 44 million residents that they are putting their lives on the line every day. For the million-plus who have fled, I believe that decision shows just as much courage. Everything they have loved and known has been left behind in a rush that is almost unimaginable in its desperation to protect family members.

The situation reminds me of what being a citizen of a particular country should entail, what responsibilities come with such a designation. It raises the question of whether I would respond the way the Ukrainians have to an unprovoked attack and threat to everything I hold dear.

Hopefully, I will never have to find out. But, even if not under military invasion, being a citizen demands I commit to certain principles and actions. Someone who lives in a country and benefits from all that entails must take certain steps to protect all that he or she holds dear.  We are part of the “team.” In large part, our actions will determine our future.

What are our duties to take part in and protect this grand experiment known as American democracy? These come to mind:

1) Commit to being educated. I would argue this is the most important requirement. A citizen must take the time to learn about the issues, to think deeply about the problems and opportunities we face, and to avoid the tendency to accept whatever the media or our favorite talking heads have to say.

Just because something is on the Internet, TV, or radio does not mean it is accurate and true, though it may be. A citizen’s responsibility is to dig deeper. Consult multiple sources for insight, including those outside your normal comfort zone. Talk to others, form your own opinions but be prepared to change what you think if new information becomes available. Rigidity is not compatible with education.

2) Commit to participate. Not voting makes you no better than a non-citizen. Not supporting candidates and issues you believe in leaves you no right to complain about the outcome. Of course, you have the privilege and responsibility to oppose against things you feel passionately about. But, if you don’t play in the game, you can’t simply complain about the score.

3) Commit to support or deny support as appropriate. Even if your dream candidate wins, even if every ballot proposition that you support passes, your duties are not over. There will be people, maybe lots of them, who disagree with you. You must work to support what you think is important and withdraw your support if someone or something doesn’t seem right.

4) Commit to following the rules. With a civilized, organized society comes the rule of law. As much as a citizen disagrees with the speed trap south of town, if caught driving faster than posted, he will pay the fine. If called to jury duty she will serve. If someone disagrees with a point of law you don’t disobey it but work to change it. As our society is structured, the Supreme Court is the ultimate arbitrator. Disagree with a finding? Work to change the law. A citizen doesn’t have the right to disobey legal statutes he disagrees with, as January 6th should have clearly demonstrated. Otherwise, we face anarchy.

5) Commit to being committed. Being a good citizen is not a part-time job. You can’t “turn it on” in an election year and then hibernate until the next one. As the points above should make clear, this is a full-time responsibility.

Without being overly pessimistic, I believe our form of government and way of life are under serious assault, and not just from outside our borders. What the FBI calls “Domestic Terrorism” is impossible to ignore; it is thrown in our face every day by those who not only hold different viewpoints but believe violence is a way to achieve their goals.

The polarity, distrust, and downright hate that seems to be what passes for social discourse has us on a path with little room for course correction.

The five suggestions above will not change any of this quickly. But, all any of us can do is focus on our responsibilities to act like a citizen who believes in what we stand for. We must be willing to put in the hard work to ensure a future that we want our children, grandkids, and great-grandchildren to experience.

We don’t have to agree with each other about everything. That is not what democracy is about. But, we must treat each other with respect, dignity, and common courtesy as we disagree. Racism, Sexism, Homophobia, and Misogyny are not compatible with that goal. Nor is making your point with the barrel of a gun.

We can, and must, do better.