Satisfying Retirement In A Changing World: Retired and Married 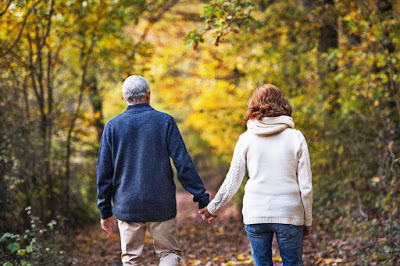 As a follow-up to the post, Retired and Alone from a few weeks ago,   I thought it would make sense to look at the other situation.

A satisfying retirement requires lots of pieces to fit and work together. Obviously, your financial situation must be sufficient to support you. Your health, or lack of it, will play a huge role in how much you enjoy your time after work. But, if you are asking my opinion, If you are in a marriage or committed relationship, the quality of that union will be more important than all the rest in how happy your retirement lifestyle turns out to be.

There are all sorts of studies on the Internet, books in the library, experts with degrees in counseling, and your sister-in-law who will tell you what to expect. It has been said that the first few years of retirement are a lot like the first few years of marriage: learning enough about each other to stick it out until you figure out how the game works.

As Sydney Lagier said in a blog of hers several years ago, ” [It] turns out that when you spend all day with your best friend, he is going to annoy you, and really for nothing more offensive than eating, breathing, and living.” She has captured the mood perfectly. Ships passing in the night are suddenly docked at the same pier.

I have written a few posts that give you some basic guidelines from various sources on making the relationship work. It is generally agreed that communication and commitment are the two linchpins of a successful retirement and marriage or serious relationship.

Rather than rehash that material, I thought I’d share some of the marriage relationship’s ups and downs that I know rather well: mine.  After 44 years together, with 20 of them as a retired couple, I have a fair amount of experience to draw on. I have no intention of telling you this is the way that will work for you. That would be foolish. All I can tell you is about some of the problems we encountered and how Betty and I resolved them (for the most part).

We discussed our plans for retirement in general terms a few years beforehand. But, the reality of what a non-working life together would mean to us wasn’t seriously addressed until the last year or so. When we decided to pull the plug on my declining business, and she was tired of preschool teaching, the timing of that change was something we both agreed to. We also decided that when I stopped working, so would she.

That didn’t work out quite as we planned. Within a year or so of us being home, she went back to work full time at a department store. She hated the job, but a sudden fear that we didn’t have enough money prompted her to agree to un-retire. That lasted a year, during which I felt guilty sitting at home, and Betty disliked the job enough that we agreed to re-retire. Besides, by then, my financial phobia had calmed a bit.

Being married and retired is an interesting study in balance. Each of you wants to spend time together, and each of you requires time apart. Just because a job has ended doesn’t mean everything else that makes up a typical day will change. We each have certain routines and habits that bring us comfort and happiness. Starting the day quietly, reading, and enjoying a cup of coffee alone may be an important part of your schedule. To lose that “me” time just because your spouse is now home could be a serious mistake. Then again, maybe you are ready for a change and would enjoy sharing cereal and conversation.

The point is to make a change to accommodate another person may be risky to the overall retirement experience. Marriage is a constant compromise, but sometimes your turf must be protected. Betty and I want a mix of both together and alone time. We must be “allowed” time to pursue solo activities and interests without feeling guilty.

Even after two decades, I can’t report we are entirely successful in this regard. But, we are getting better at voicing our need for separation as well as togetherness. I am more respectful of Betty’s timing, and she is getting better at telling me to buzz off.

A past post generated some rather strong comments (several of which never saw the light of day), particularly from men, that I had caved into the pressure of becoming too much of a house husband. I had earned my leisure time and shouldn’t have to do chores.

Besides being downright silly, that attitude will buy you a miserable household. Betty and I have divided the chores for our entire married life. The only change retirement brought was I stopped traveling so I could pitch in a bit more.

I have always done my own laundry. After all, I dirtied the clothes, why shouldn’t I clean them? One of us cooks, and the other cleans up. While I tend to do most of the yard work, it isn’t because that is “man’s work.” It is simply that she can’t take the heat like she used to, and I enjoy the process more. Plus, her body is not nearly as flexible and forgiving

as it once was.

Every week we rotate between emptying the dishwasher and making the bed, so one person isn’t always stuck on the same job. In this area, things have worked well because we followed the same procedure before retirement.

This is one area where we need to do a better job: setting goals more democratically. I will admit that most of the time, my opinion wins. What I think should happen usually does. But, over time, Betty has used various methods, both passive and aggressive, to remind me she gets a vote, too. Actually, over the past half dozen years, I think she has “won” more often than “lost” when we have a goal to set.

Short and long-term goal setting is vital in a retirement relationship. Everything from financial adjustments to vacation choices, when to see the grandkids, and whether we should get a new dog requires a decision. Both partners need to feel his or her opinion is being considered. Both pros and cons need to be aired. I have been very good at airing my thoughts. This is a very public way to say I need to shut up more and listen harder. It will make the marriage stronger and the experience richer.

Marriage after retirement is different. But, as any married person will admit, nothing in a marriage is static. Change is continuous. What retirement does give you is the time to improve how that change is handled. If you do it well, the odds of being happy increase dramatically.