Planning Your Own Retirement Party 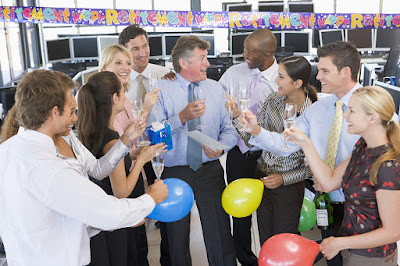 For the last 20 years of my career, I worked for myself. So, I never had a retirement party. Frankly, I don’t know they are still a thing. I’m pretty sure the gold watch cliche is history. But, a party of co-workers gathering to wish someone well as retirement begins probably continues.

What I want to do with this post is to use our imagination. Plan what others would say about you as you turned in your name badge for the last time.

What would fellow employees remember most about you? What uniqueness did you bring with you to work? Would clients miss your weekly sales calls?  Would people you see every day be happy for you…or envious? Will your former students stay in touch through the years?

I completely understand the idea of thanking someone for years of work, for dependability, for putting the job (whatever it is) before personal concerns from time to time. We all like a pat on the back and a “thank you” for a job well done. Even so, the concept of what retirement is and what it can be has changed so much over the last generation that a farewell party may be passe.

When my parents retired, for example, they were about to start what every one of their generation expected after years of work. Whether it was my dad’s engineering and sales positions, or mom’s decades of teaching, their parties made the standard jokes about rocking chairs, long vacations, and sleeping late.

Schedules and requirements were seen as ending. The hidden, or unspoken message was implied: “Your productive life is over. Relax and enjoy your sunset years.”

Today, that is not how most people I know, those who I interact with on this blog or read about on the Internet, think about retirement. Yes, there is a major life shift after leaving the world of work. For too many their personal identity is so wrapped up in their employment status that they feel adrift, without purpose, and invisible.

But, I would hope that those who read this blog, and others, have come to the conclusion that not only is retirement not the end of anything, but actually the start of a stage of life filled with a sense of freedom and possibility that most of of us have not experienced since early childhood.

If this is true, then how do we plan our own retirement party? I think there are a few elements that should be included. Firstly, if you have worked for a company and with other people for a period of time, it is proper to thank them for what you have learned, been allowed to contribute, and being made to feel valued.

If your co-workers want to throw you a farewell party, by all means, allow it and react with graciousness and good humor, even if there are foam tombstones and old geezer baseball caps presented as gag gifts. Likely, there is affection and a feeling of loss at your departure. A retirement party can be a form of grieving for some people. Your presence will sincerely be missed. The party is also a reminder that time is passing for all of us and someday we will be the person being given a desk plate and silly coffee mug.

The second part of your own retirement party should be a period of reflection. What parts of yourself were well utilized at work? What skills and talents did you develop? Importantly, what did not get a chance to shine, to be explored, to be exposed? What parts of you were left on the shelf?

Why dredge up those thoughts? Because, starting now, you have the permission, the freedom, even a strong need to bring those parts of you out of hiding. Open the storage door wide and allow the parts of you left in the dark for too long to shine, to be put to use, to be explored.

Part three of your retirement party comes later. It starts on the day you stop defining yourself by what you once did and frame the narrative around what you want to be, what you could be. This is when the retirement phase of life truly begins.

After any “official” going away party, I urge you to throw your own retirement party.  The most fascinating, creative, and fulfilling stage of life deserves nothing less.